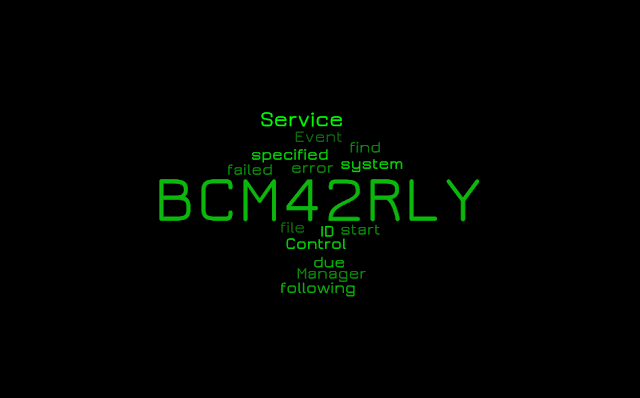 Recently, I had to swap out a wireless adapter on my Threadripper workstation.  My original TP-Link T9E Archer's drivers refused to work on Windows 10 (and also on my Debian system too), so I swapped it out with an ASUS PCE AC56 card.  However, while I was repairing some boot issues, I noticed that my event viewer was spammed with a BCM42RLY problem with error code 7000.  The exact message was always this: The BCM42RLY service failed to start due to the following error: The system cannot find the file specified. (Event ID 7000, Service Control Manager).

Although I was worried at first, I quickly realized it had to with Broadcom products, which exist in the ASUS wireless adapter.  Eventually, I figured out that the following simple registry edit will fix this issue.  Navigate to "Hkey_Local_Machine\System\ControlSet001\Services\BCM42RLY" and change the value in "start" from 3 to 4.  Do a COMPLETE shutdown and then boot up your computer again.  Your event viewer should no longer be plagued with BCM42RLY error spams.

Posted by BitsByWill at 10:50 AM No comments:

Click here to access my HacktheBox profile (will135). I am on team TCLRed. Make sure to check out our team captain's blog (TheCyberGeek)!