Patents was quite a difficult box from gb.yolo (who's now a teammate of mine!) with a realistic pwn in the end.  Overall, it was a very enjoyable box that took a while!  Before I start, I would like to thank D3v17 and pottm, my teammates who worked with me on this box.  Additionally, I would like to thank oep, Sp3eD, R4J, and Deimos who I also colloborated with at times throughout the box and discussed with afterwards.

On the initial nmap scan, we see port 22, 80, and 8888.  Port 8888 seems to be a web server, but none of the browsers would work with it and it mentions something about LFM... I wasn't too sure what this was so I ended up focusing all my efforts on the port 80 webpage. 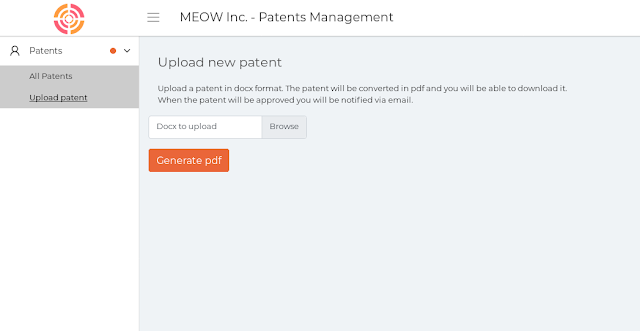 After a while, I ended up retrieving a lot of enumerated folders back with dirb and gobuster.  None of them really showed anything insightful, and I tried around with XXEs and other possible attack vectors against this document to pdf conversion as it allowed us to upload docx files to convert into pdf files.  I ended up going back to more enumeration to see if anything else more insightful would appear, using different wordlists from seclist.

After a few more hours, the following showed up from Discovery/Web-Content/raft-large-words.txt in the release subdirectory in dirb: http://parent.htb/release/UpdateDetails

It showed the following details:

As Sp3ed mentioned to me, the author keeps mentioning a custom folder and entity parsing there.  Googling around, you can find several references to a customXML part or folder in word documents.  Perhaps this is where we can utilize the XXE!

Starting off, I just created a fresh new word document (you can download samples here: https://file-examples.com/index.php/sample-documents-download/sample-doc-download/) and unzipped the internals, then added a customXML folder.  This SO post also revealed some important information by mentioning how the format within this part should be item#.xml: https://stackoverflow.com/questions/38789361/vsto-word-2013-add-in-add-custom-xml-to-document-xml-without-it-being-visible

Quoting the post:
"The item#.xml files are where custom XML get stored, and it's the only way to store complex data in a Word document without it being a part of the document content. Another program can read it pretty easily, typically using the OpenXML SDK.
So you're doing the right thing here, but whatever software needs to read this needs to look in the customXml folder for that item#.xml file, instead of the word/document.xml file. It will have to look for the namespace you defined."

In that file, I tried some different XXE payloads from here, then remade it into a docx and uploaded it: https://github.com/swisskyrepo/PayloadsAllTheThings/tree/master/XXE%20Injection#xxe-oob-with-dtd-and-php-filter

After a few different payloads, I figured that this is an out of band XXE (hence the link above): https://www.acunetix.com/blog/articles/band-xml-external-entity-oob-xxe/

This went into the item1.xml file.

On my local side, I hosted an http server with the evil.xml dtd (the base64 helps make the data exfiltration easier):


I ended up getting a response pretty quickly:

Basically, the xml parser requests the dtd file hosted on my side, which then tells it to load the target file and then send the data in the form of base64 encoded data back to me.  Anyways, let's try to get some useful information!  Turns out looking at vhost data can provide some interesting insight!  I thought vhost because none of the other files dirb/gobuster found seemed to be able to be exfiltrated.

After base64 decoding the output, we see the following:

Ah, so the root dir for this web server is at docx2pdf!  Now, taking a look at config.php:

Interesting... it mentions getPatent_alphav1.0.php.  Let's play around there... it tells us how to use it.

Before playing with it, I attempted to exfiltrate the source but I got nothing out of it, which is odd, so I just tested some payloads against the id parameter.
Almost immediately, this url borked the webpage weirdly: http://patents.htb/getPatent_alphav1.0.php?id=....//index.html
This is starting to sound like lfi.

Following the same pattern, I got the default apache html webpage: http://patents.htb/getPatent_alphav1.0.php?id=....//....//index.html

Anyways, there is lfi here... after a while of testing, my teammates and I decided to try referer poisoning to pop a shell.  Basically, during file upload, we set a malicious simple PHP webshell oneliner as the referer.  Then, using the classic /proc/self/fd technique with the payload injected into error logs, we can pop a shell by sending in a reverse shell command. Here were the commands I used:

Quickly testing this password on the users on the system, it worked for root and we got the user flag!  Based on the hostname alone, I'm pretty sure we are in a docker container.  Anyways, after some more enumeration, I found a git repo which I transfered out from /usr/src/lfm (this would explain port 8888!) and some client flies to interact with this server in /opt.

On my side, I noticed that the repo was empty... I read through the git log and reverted a few:

From these, I ended up with a stripped binary and partial source code (Sampriti later informed me that there was also a nonstripped version if I reverted a version lower in the list... I wish I caught that).  Anyways, let's start reversing... the code base is massive but pwn is what I am best at :p

Quick disclaimer... for this pwn part, one of my teammates accidentally posted my script to pastebin with public view settings, so you might have seen it before as cheaters have spread it everywhere.  I requested HTB admins to take it down and the original links are now removed, but of course cheaters have spread this script over pastebin as well.

Running checksec shows no canary, partial relro, and no pie... this will make my life much easier.

Since this codebase is so large, I believed it was helpful to fuzz around first and try to trace a crash.  Starting the program with ./lfmserver -p 8888 -l log.log, I found the process id and attached pwndbg to it with set follow-fork-mode child.  Hopefully we can catch a crash this way.  Using the client file, I sent in a massive payload of a few thousand bytes and eventually caught a crash and the backtrace showed the following:

Using this information, I can trace it to the following function in Ghidra (I've decided that IDA offers much) from 0x402e46 to 0x402db9.  Based on the strings I see in there and the way it iterates over the characters to make a new string tells me that this is possibly the urldecode function.

Funny enough, this function also wasn't implemented in the source code.  It had the comment of TODO.  I ran the following command to check for more instances of the TODO comment.

So basically in the source code, urldecode, handlecheck, handleget, and handleput are not implemented.  I think it's safe to assume here that the rest of the program should behave very similarly. Those functions in turn (from lfm.c) are called from the big handler function.

That function is called from the thread_work function.

Looking at the urldecode function in GHIDRA, I noticed that there was only one function that referenced it, which is handle_check.  At this point, I'm pretty sure that this function is the vulnerable one.  Here was the decompilation for handle check.

Before we continue, it is important to address the protocol for handle check.  Honestly, there wasn't much reversing necessary as you have the client interaction files.
Basically, you need to send in CHECK with /filename and then username with User= and password with Pass= and then the md5sum of the requested file based on this line:

User and password is lfmserver_user and the root docker password.  Note that for the file check, I ended up choosing ../../../../../../proc/sys/kernel/randomize_va_space since most systems have full ASLR enabled and therefore, I can guess the hashed contents by just hashing my own file.

In the codebase, this is the vulnerable line: urldecode(*(undefined8 *)(apuStack192[2] + 0xc),local_a8,(ulong)((int)sVar3 +1),local_a8);
local_a8 is a 128 byte buffer; it is decoding your original urlencoded string into that (while the length is treated as strlen + 1).  I quickly rewrote the urldecode function and it looked like the following (not 100%  correct, but enough to find the bug):

It's copying in an amount based on the length of the urlencoded string... that is a very bad idea as there is no correct bounds checking  on the destination buffer so we can have an overflow.  Quickly fuzzing around for the offset in the standard buffer overflow manner, this ended up being the payload used to start controlling RIP:

There are two important things to note in this payload... the %x00 isn't actually a null byte (decode it and see for yourself).  It is literally “%x00”.  The two zeros were added on afterwards to help me get overwrite RIP correctly after some trial and error.  The %x is quite important.  The urldecode function decodes based on strtoul on the number values after the %.  It will return 0 if it is invalid and place that into the destination.  Therefore, %x is invalid in base 16, and it will place a null byte, hence allowing the file check to still behave normally!

Afterwards, it's just a simple rop.  When you are confident about your ROP chain but it still fails, make sure to just throw in a ropnop; perhaps lfmserver was compiled with a newer version of gcc that requires certain functions to have 16 byte alignment.  Some people were wondering whether a ret2csu was required to control the rdx register when leaking with write, but if they debugged that part, they would have noticed that the rdx value is a perfectly acceptable number that will not print out too many bytes.  I first ran it on the remote server with not too much of an idea of the exact libc file; after the first leak based on the dup2 function. I plugged the last 3 digits into libc database and it returned the following link for me: http://ftp.osuosl.org/pub/ubuntu/pool/main/g/glibc/libc6_2.28-0ubuntu1_amd64.deb

Then, just call dup2 to change with the fds (I bruteforced it to be 7) on 0, 1, 2 and then used a magic one gadget to pop the shell.  As it is a forking socket server, the addresses from libc should not change with each new connection.  Here is my exploit with comments:

Afterwards, it spawns a shell! 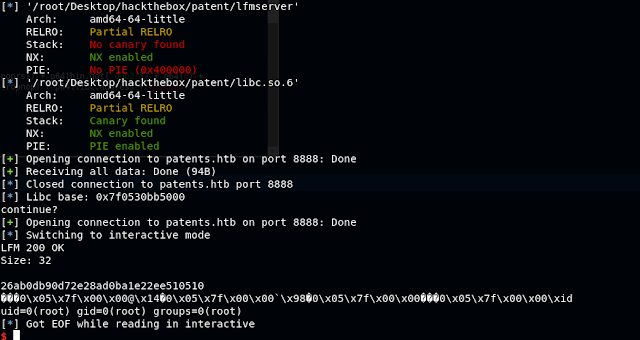 After some enumeration and a fake flag in another git repo, I noticed some drives from lsblk. 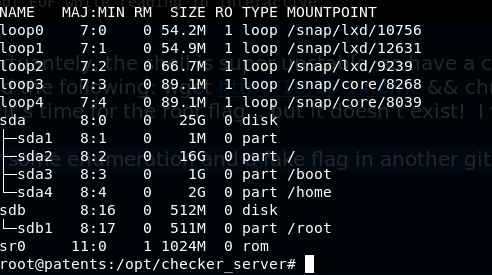 And now finally rooted!  What a journey.  Now I'm just waiting for HackTheBox to release the great pwn box everyone wants to see... Rope2 from R4J.
Posted by willsroot at 8:27 AM